THE HIDDEN AGENDA OF THE FLU SHOT

"Never doubt that a small group of thoughtful, committed, citizens can change the world. Indeed, it is the only thing that ever has" -- Margaret Mead --

It's no coincidence how the flu shot is being forced on us like never before. The advertisements are ceaseless; coming from billboards, T.V. commercials, radio, and whatever other creative way sellers can think of to push this vaccine. Some employers, are even now requiring their employees to receive the inoculation or risk losing their job. Knowing firsthand the devastating effects the Flu Shot can render, my heart drops every time a new advertisement pops up. A few days ago, when driving past a local pharmacy, I couldn't help but cringe. I was used to the usual "Don't Forget Your Flu Shot" signs up all over, but was shocked at what I saw on this afternoon! Their usual Flu Shot advertising had obviously taken on a whole new level of approach----as there was an employee dressed as a vaccine needle, trying his best to direct traffic over to the store. I watched in dismay as he held a sign up that read, "Free toy given with every Flu Shot." My eyes became tear-filled as I thought to myself: This is definitely all about the money ---- Why else is a vaccine being thrust upon us so much, without even knowing the way different people's bodies will react to it? And why are the possible adverse effects being kept so hushed? Something has to be done!
It is proven that the Flu Shot contains one or more toxic ingredients! One of these, named Sodium Deoxycholate, is better known as 'Detergent!' This chemical can weaken the blood-brain-barrier and subsequently activate seizures, or other conditions such as: encephalitis (brain swelling) or Guillain-Barre syndrome! Mercury, a well known neuro-toxin, also still remains in the Flu Vaccine. U.S law actually requires it be in there because it is an effective preservative. We have long heard our government say mercury is safe in vaccines, but I beg to differ! The pharmaceutical companies also don't seem to be in a hurry to reveal that aborted human fetus cell lines are used in the early stages of production in most Influenza vaccines! They say these are used because the vaccine needs a living cell in which to grow and that purification steps ensure these cells are not in the final vaccine product...BUT considering all the secrecy going on with this vaccine...I wouldn't be quick to believe their reasoning! Why would these chemicals be allowed to remain in any vaccine? Why does our government feel we should be comfortable with injecting our children, elderly, and pregnant women with these deadly toxins? Why is proper research not being done by the pharmaceutical companies on how people's bodies can or can not metabolize and excrete these toxic ingredients? These questions can no longer go un-answered! They need to know that we will not stand idly by, while this Hidden Flu Shot agenda wreaks havoc on so many families lives! Another parent should not be left grieving after the death of their precious child to the Flu Shot or having to watch their loved one's life transformed forever, from a vaccine that is definitely not safe and needs major reform.
In Italy, after three people have recently died and another fights for their life after taking the Flu Shot, the vaccine has now been Banned! Our government should see this as a 'wake up call', per the fact that another country is even recognizing the deadly dangers of this vaccine!
Vaccine Reform in this country, with an emphasis on the Flu Vaccine, is long over due! I am in no way anti-government, but sometimes Change Needs To Be Made And You Must Stand Up For What's Right! It is time to get back to the principles our forefathers founded this Great Country on and not be expected to lay down and take pharmaceutical and other government agencies putting our loved ones at risk, because they have trillions of dollars backing them. The well known author, poet, and philosopher, Henry David Thoreau, once said it is sometimes best when individual's rights take priority over state authority. During the American Renaissance Era, a time when injustice ran rampant, Mr. Thoreau was no stranger to standing up for what he believed in and trying to correct wrongs. My fellow mankind, I say to you, it is now time we really push our own agenda ---- the agenda to save many lives through much needed Flu Vaccine Reform!
I am currently in the midst of launching a national campaign called the Maurice Lamkin Jr. Amelioration Act, calling for immediate reduction and elimination of toxic Flu vaccine ingredients. Our own journey has taught me to never give up and to inspire change whenever possible. I've made it my mission in life to keep people from going through the pain my son endured, after taking the Flu Shot. I urge you to stand with me in this fight to bring about much needed reform! Next week, I will post an online Petition on my www.flushotgonewrong.com site, which will need as many signatures as we can gather. Stay tuned to the site for details and I will also put on my blog when it has been posted. This petition will accompany me to Washington, DC in a few months, when I meet with community leaders and lawmakers. This will be a tough battle, but I rest assured God is leading and guiding my foot steps! Isaiah 45:2 KJV says 'I will go before thee and make the crooked places straight: I will break in pieces the gates of brass, and cut in sunder the bars of iron.' Thank you for your support and  Together, We can bring about much needed change and reform! 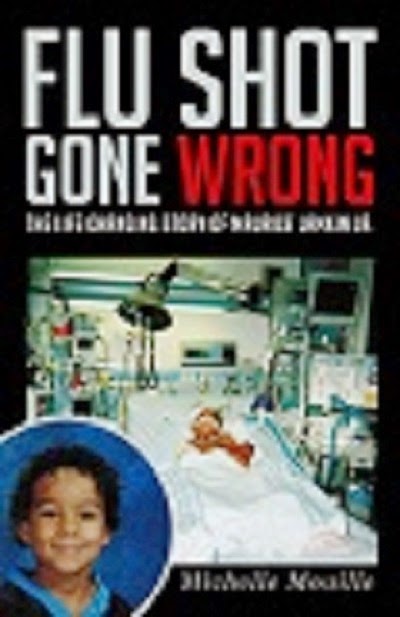